Home > Cold Weather Sport > Curling: What is it and Where Can I Play?

Curling: What is it and Where Can I Play? 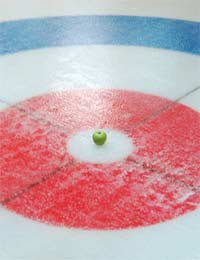 The sport of curling has come to mainstream attention through the winter Olympics in recent years, and many of us have watched the sport on TV and wondered what exactly is going on!

What is Curling All About?

Curling is an ancient Scottish sport which has been described in the past as a cross between bowling and chess set on ice! In an average curling game, two teams with four members each slide 42-pound granite stones on a specially prepared sheet of ice toward a target, which is called a ‘house’.Once the stone is thrown, it will always curl one way or the other – which is where the name of the game comes from. To stop the rock curling too far off target, team members sweep the ice in front to help encourage the stone towards the target, sprinting along the path of the stone as it moves, and sweeping with special curling brooms to control the curl and the speed. While this is going on, the opposing team uses tactics to try to stop the stone getting to the house.

The action of sweeping helps to melt the ice slightly, and this reduces the friction between the stone and the surface. This means that the stone will curl less as it moves forward – and therefore slide further. Sweeping also helps to move any debris out of the way which could potentially knock the stone off course.

Each player on the team throws two stones during an ‘end' - which is like a cricket innings, and the team that’s scored points after 8 or 10 ends wins the match.

Curling is a very inclusive winter sport. Anybody can learn to play, it doesn’t need a lot in terms of athletic ability and it’s not age dependent at all. There are teams and clubs all across the UK that children can join - as soon as they are big enough to throw a stone - and adults can carry on up to and well past retirement if they choose – it’s not a strenuous sport. It even suits less mobile players, as there are ways and means of joining in without having to bend down, and there’s even wheelchair curling!

Do I Need any Special Equipment?

There’s no special equipment needed for curling, as the teams will provide the brooms and you can usually hire the shoes from the club or the rink. Ideally you should wear something warm and comfortable, like a fleece and some track suit bottoms.

Where Can I Find a Curling Rink?

The best place to look for a curling rink or club is on the website of the English Curling Association, which is:

There are clubs springing up all over the UK where you can learn to play the game and find out what it’s all about, The popularity of the sport at the winter Olympics has encouraged interest and it looks like curling is likely to become more and more popular as it gains more mainstream coverage.